Government Donates Relief Items To Flood Victims In The North

The Vice President of the Republic, Dr Mahamudu Bawumia has, on behalf of Government, handed over assorted emergency relief items to the victims of flooding in some communities in the Upper East and West regions.

The families of those who passed away as a result of the flood also received cash donations to help lessen the burden such deaths had imposed on them.

Unusually heavy rainfall this year has caused major devastation in parts of the three northern regions. The spillage of the Bagre Dam in Burkina Faso has only worsened the situation, leading to the loss of several lives and the destruction of property worth millions of Ghana cedis.

Affected communities include Mangu, Kambali and Kunbiehi in the Wa Municipality of the Upper West region; Walinbalee in the Sissala East District; Siniesi in the Builsa North district; Kologo in the Kassena Nankana East District; and Winkogo in the Talensi district, all in the Upper East Region.

Accompanied by the Minister for the Interior who is also MP for Nandom, Hon Ambrose Dery; Minister for Defence and MP for Bimbilla, Hon Dominic Nitiwul; Minister for Aviation and MP for Navrongo Central, Hon Joseph Adda, the Director General of the National Disaster Management Organisation, Eric Nana Agyemang-Prempeh, and other officials, Vice President Bawumia inspected the damage and commiserated with the victims. 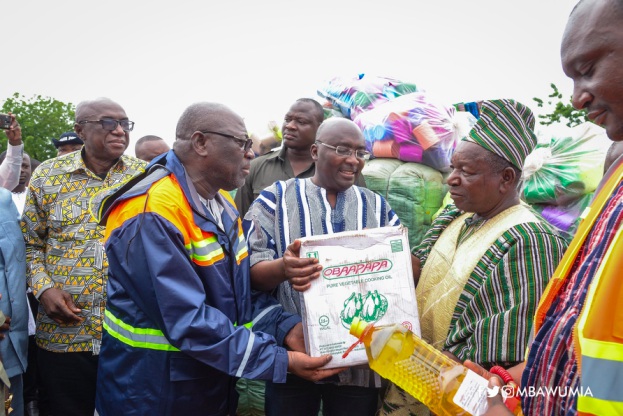 He also pledged government’s commitment to deal with the factors that led to the floods and deaths, including broken bridges and the lack of flood control measures such as dams.

Responding to a call by the Paramount Chief of the Talensi Traditional Area, Tongo-Rana Kubilsong Nalebegtang, for the revival of plans – drawn up by the Kufuor administration – to construct a multi-purpose dam at Pwalugu and Juala, Vice President Bawumia disclosed that President Akufo-Addo was paying keen attention to the matter, and Government is  holding consultations to fast track the construction of the dam.

Vice President Bawumia explained that the Pwalugu project would not only control flooding, but would also help to enhance agriculture production through irrigation and also help generate electricity to meet the growing national demand.

“Tongo-Rana, I can assure you that we are very interested in making sure that this project sees the light of day”, Dr Bawumia indicated.

The Vice President will on Sunday 22nd September, 2018 visit areas affected by the floods in the Northern region.